(14)
Customer Reviews
"The painting is beautiful. perfect image by the artist. The artist is talented. So pleased and I have ordered another painting.."

"I am very happy with your products quality as well as your service. Especially to Kevin. Thanks very much! Andy from Sydney Australia."

Amazing quality, we are very pleased with the artwork by the talented artist, thank you. We will definitely order more from your studio.

Excellent work! Such a quality painting and great service. Thanks a lot! Stuart Genova from Israel

I am very pleased from the LKL studio reproduction of Van Gogh's painting "Red Vineyards at Arles " and looking forward for another orders.

"Please, could make the painting look just like the old i purchased a few months ago. It was perfect. Colors and texture."

Yes. This is perfect. Thank you Jackie, I am so excited! Susan

In 1477, Botticelli painted "Spring" for the Medici Villa with the theme of Politian's long poem in praise of Venus, the god of love. This painting has become, along with The Birth of Venus, two of Botticelli's most famous paintings in his lifetime. In this painting, Botticelli used his imagination to reinterpret ancient myths. The lines of the characters are smooth, the colors are bright and brilliant, but there is a hint of sadness in the atmosphere full of joy and serenity. At the top left of the picture is the god of wind, he hugs the god of spring, and the god of spring embraces the god of flowers. The god of flowers decorated with flowers sprinkles flowers on the earth; in the middle of the picture stands the goddess Venus, flying above her head holding the love of love. Cupid, the little god of love with arrows; on the right side of Venus are the three beauties dancing hand in hand, they symbolize "huamei", "chasteness" and "joy" respectively; the lower right of the picture is the envoy Mercury of the main god Zeus.

"Spring" was commissioned by Sandro Botticelli by Lorenzo de' Medici, the head of the Medici family at the time, to decorate his 14-year-old nephew Pierre Francesco and A The marriage room of Semiramd, the daughter of the Piani family.

The painting is based on a poem by the Renaissance poet Angelo Poliziano about love in spring: an early spring morning, in the beautiful and quiet orchard, Venus, the dignified and charming god of love and beauty, is in the center , is waiting with a relaxed and elegant expression to hold a grand ceremony for the coming of spring.

This garden is looked after by Venus, the god of love and beauty. She is standing in the center of the picture, holding her dress to the left and right, her right hand slightly raised, symbolizing the source of life for all things in nature. Botticelli dressed Venus as a married woman's turban, implying that the theme has something to do with marriage.

Above Venus is the little god of love, Cupid, who shoots arrows blindfolded, confirming a Western proverb: "Love is blind." Cupid's arrow points to the three goddesses of beauty, who are the garden maids of Venus, representing love, chastity and beauty respectively, and they are dancing gracefully.

On the left of the three goddesses of beauty is Mercury, the messenger of the gods. He wears a red cloak covered with flame patterns, wears winged sandals, and holds a staff of peace with two snakes in his hand. His gestures go everywhere. , Immediately in spring, everything on the earth will recover and a hundred flowers will bloom.

In a group of statues on the right side of Venus, Zephyros, the god of the west wind, is chasing the running girl Cloris wildly with bulging cheeks. When Kloris with a small flower in her mouth was captured, she jumped into a flower god in a gorgeous floral dress with a radiant face, and the position she was standing was exactly where the fleeing Kloris will reach the next step. The place.

The painter used the more traditional tempera paint, an almost forgotten pigment that gives the painting its dreamlike, blurred quality. Botticelli first used a dark color as a base for the picture, and then painted on the base color, the effect was light and transparent.

But the painter was not dissatisfied with this, and the technique he used was more complicated than that of tempera, that is, the combination of lead white and tempera. The heavy pigment of lead white can highlight the texture of Luoshan in the details, which is a major breakthrough in the painting technology of "Spring".

"Spring" breaks through the shackles of religious themes in content, with strong lyrical colors and full of the author's spirit of humanistic care. In terms of skills, the artist uses more traditional tempera paint, which is almost forgotten. Dreamlike blurred qualities.

Botticelli first used a dark color as a base for the picture, and then painted on the base color, the effect was light and transparent. He also used lead and white to depict the Luoshan on the goddess with the cross-hair method, adding a sense of heaviness and realism to the painting, reflecting his realistic painting style, which is a major breakthrough in the painting technique of "Spring".

Botticelli pursues dreamlike charm in the form of painting, but is faithful to reality in spirit, and the picture is covered with a layer of sadness. Most of his works are based on religion, mythology and history, which are poetic and secular. 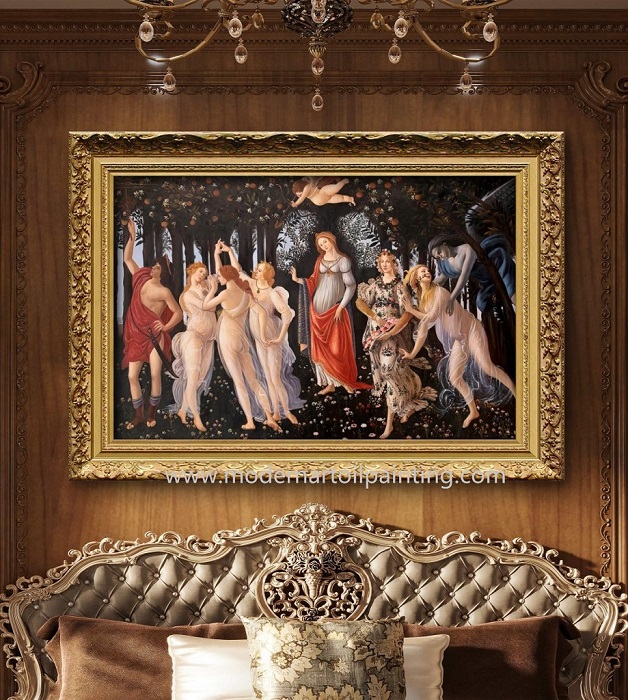 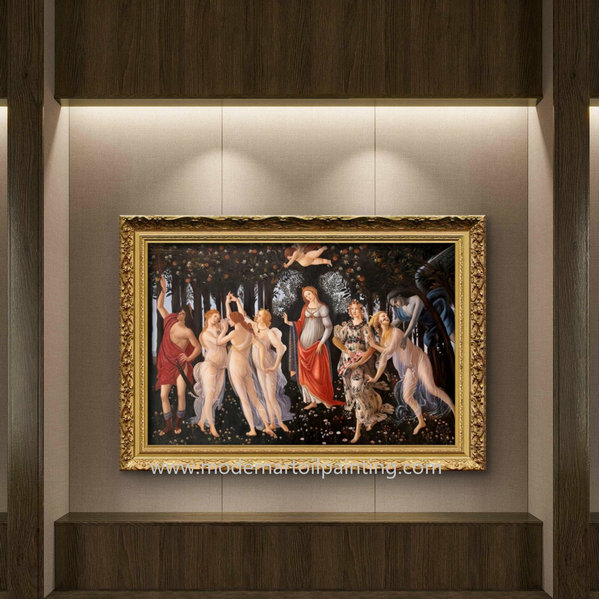 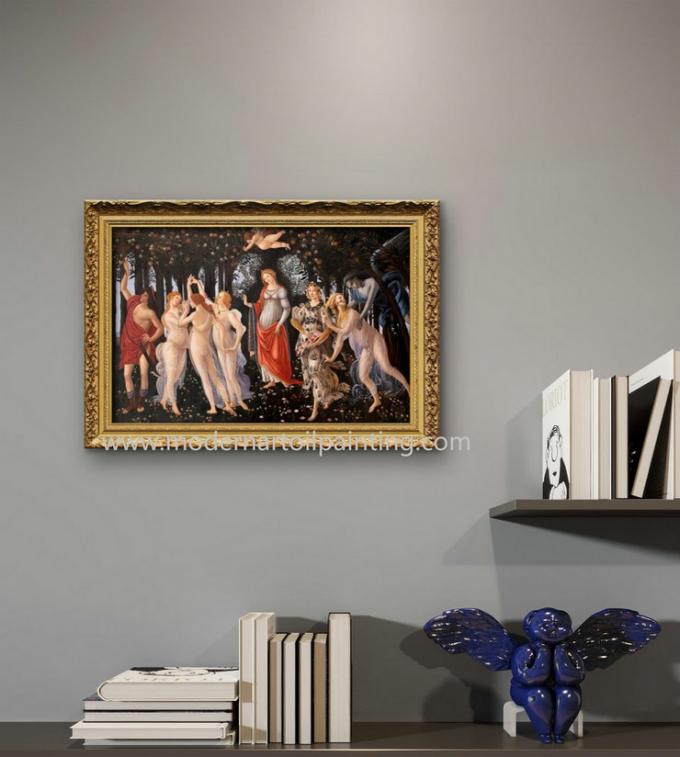 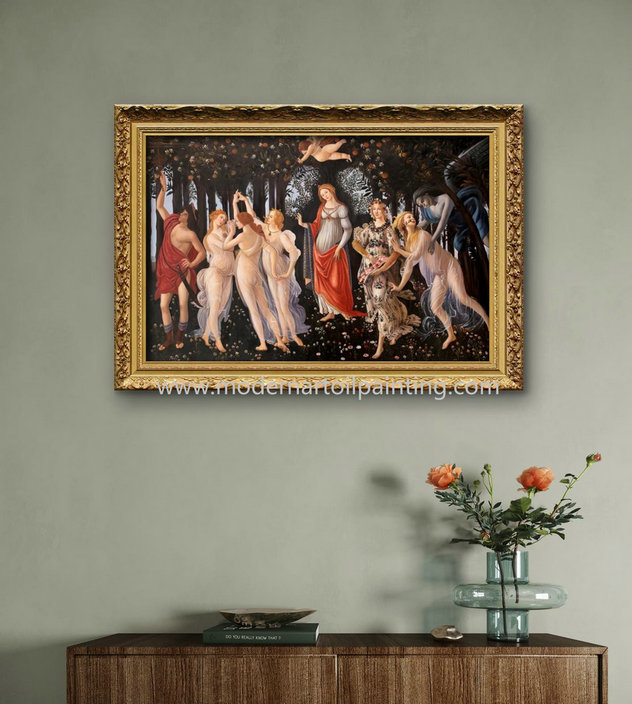 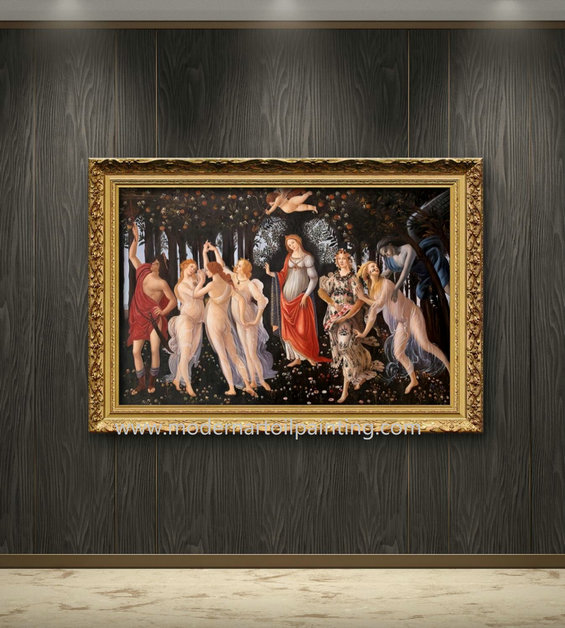